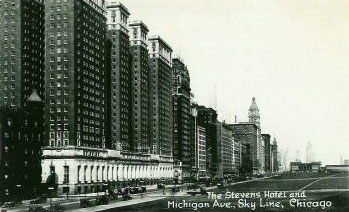 The Academy had its origin in 1950 in Chicago, Illinois. The three men who deserve credit for the concept and preliminary planning for the Academy were: Dr. Stanley D. Tylman, Dr. Claude R. Baker, and Dr. George H. Moulton. These men of vision rallied other important leaders in the crown and bridge field to actively support their cause. Together they planned an organizational meeting that took place at the Stevens Hotel on February 5, 1951. Those present at that meeting were: Doctors Stanley D. Tylman, Arthur O. Klaffenbach, Robert P. Dressel, Alver Selberg, Charles E. Peterka, Earl A. Nelson, Claude R. Baker, and George H. Moulton. Dr. Baker was chosen temporary chairman and Dr. Moulton as temporary secretary. The next meeting was at French Lick, Indiana, on March 19, 1951, where the tentative Constitution and By-Laws were presented for final approval. Charter Members were initiated into the Academy on February 2, 1952, in Chicago, making this the first annual meeting of The American Academy of Crown and Bridge Prosthodontics.

The present name, The American Academy of Fixed Prosthodontics, was adopted in February 1991.
-Submitted by Dr. Jesse T. Bullard